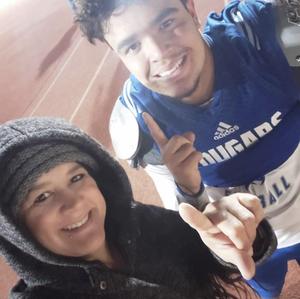 As he prepares to graduate and considers the four years of high school football in his rear-view mirror, he won’t miss the roar of the crowd or the trash talk on the field. That's because he’s never heard it in the first place.

Sacking quarterbacks, prowling into the backfield to hunt down running backs, and generally disrupting the other team’s offensive pursuits, is what Beaumont High School’s Shaun Cannady has been known for on Friday nights over the last four years.

As he prepares to graduate and considers the four years of high school football in his rear-view mirror, he won’t miss the roar of the crowd or the trash talk on the field.

He’s never heard it in the first place.

Shaun Cannady was born deaf and he’s learned how to succeed in school and in athletics while communicating using American Sign Language (ASL).

As a young child, Shaun Cannady received deaf/hard of hearing services from the Riverside County Office of Education. He learned ASL through classes, videos, and books. Throughout all four years of high school, Shaun has worked almost exclusively with Shantel Ornelas from Rise Interpreting who learned ASL because her son was born deaf.

“There really aren’t a lot of challenges for me as the students and staff are here to help me every day,” Shaun said. “Shantel is with me in class, in the weight room, and on the field.”

Shaun has been playing football for seven years. As a freshman, he tipped the scales at 140 pounds and has now bulked up to 210 pounds. He was a starter during his junior and senior year where he played as a larger, quicker defensive end.

Shaun taught many of his teammates how to sign, and his interpreter, Shantel, worked the sidelines as a communications link between Shaun and his coaches and teammates.

Shantel quickly learned that the action on the football field can sometimes spill over onto the sidelines on any given play, and she was usually able to dodge the dogpile of tacklers.

“I’d have to stay close to the coach because he would sometimes yell for me when trying to communicate to Shaun,” Shantel said. “One time I ended up getting tackled on the sidelines because I couldn’t get out of the way quickly enough.”

Shantel found herself at a much safer distance when interpreting for Shaun when he competed as a wrestler where he advanced to the CIF tournament during his junior and senior years.

Sporting a 3.87 grade-point average, Shaun has been accepted to Gallaudet University in Washington, D.C., a school that bills itself as “the world's only university designed to be barrier-free for deaf and hard of hearing students.” He intends to play as a member of the Bison football team and will continue training throughout the summer in preparation.

“I’ve really seen him grow academically and socially. He is such a go-getter and he can’t walk through the school without people coming up to him,” Shantel said. “He is so impressive as a role model for younger students who are deaf or hard of hearing. He’s going to do great in college and I’m going to miss him a lot.”

For Shaun, the feeling is mutual.

“I couldn’t have done it without the support I’ve had from family, staff, coaches, and Shantel,” Shaun said. “She is now my family, and she will miss me too.”